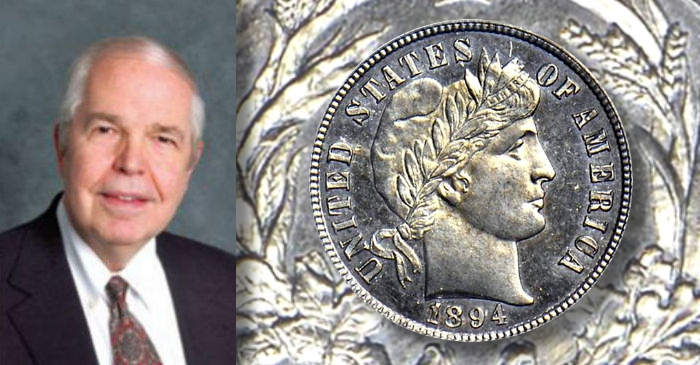 The Barber-type dime minted from 1892 to 1916 features on the obverse Miss Liberty facing right, her hair in a Phrygian cap and wearing a laurel wreath, with the word LIBERTY in tiny letters in a band above her forehead. This word is in the area of highest relief, with the result that it wore away quickly. The inscription UNITED STATES OF AMERICA surrounds, and the date is below. 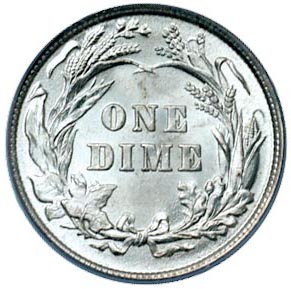 The reverse was adapted by Charles E. Barber from James B. Longacre’s cereal wreath design, which was used on the Liberty Seated dimes of 1860 to 1891. Close examination will reveal slight differences. The design features a large wreath enclosing ONE DIME. There was no room for the motto IN GOD WE TRUST on the coin, so it was omitted. 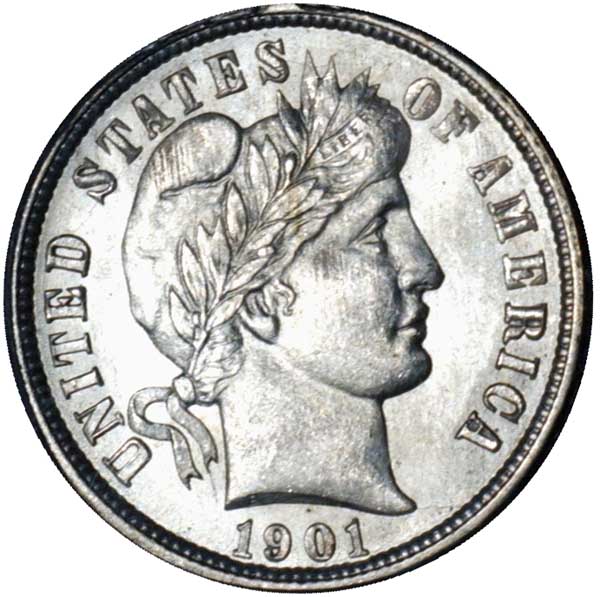 In 1901, a new obverse hub die was introduced in the Barber dime series. The differences between the new and the old are very subtle and require magnification to detect. On the old, the ribbon touches the left upright of the “N” in UNITED, and a leaf tip is distant from the second “S” of STATES. On the new, the ribbon is clear of the “N,” and the leaf is very close to the “S.” This alteration seems to have lowered the relief slightly, almost imperceptibly, with the result that dimes with this obverse did not have the word LIBERTY wear away as quickly, perhaps adding one to three years to the life of the dime before this happened. Also in 1901, a new reverse hub was introduced in the Barber dime series. The difference between the new and the old is very subtle. On the old, the right wreath ribbon is lighter than it is on the new. Neither of the two hub changes has ever gained traction in numismatics as a variety. 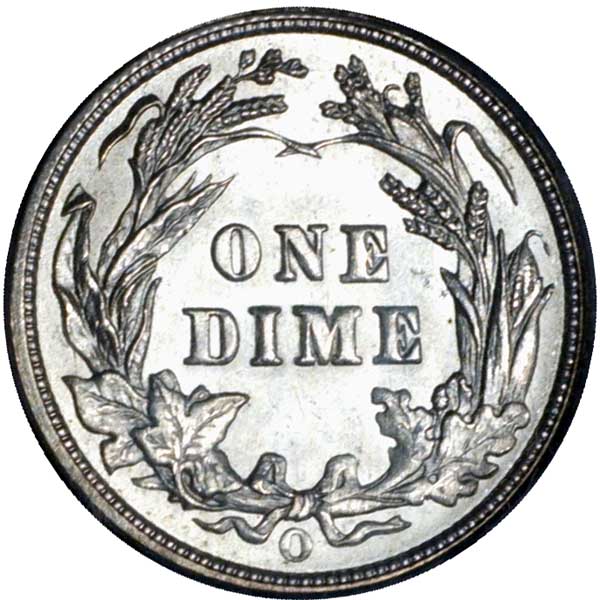 Today, to qualify as grade VG-8, some letters in LIBERTY must be visible. To merit the Fine-12 designation, all letters need to be readable, although those in highest relief can be weak. 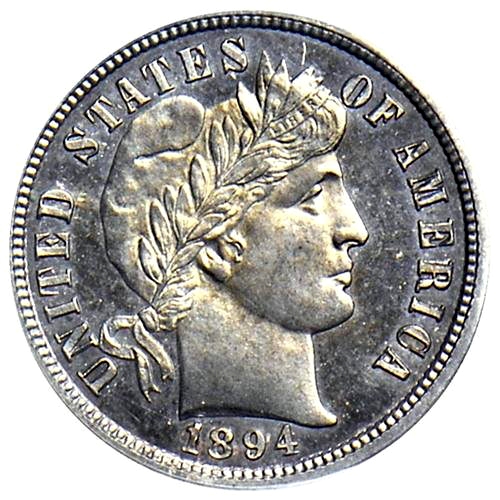 The 1894-S dime, of which just 24 were struck and only eight can be confirmed today, is a non-collectible (not available) and can be put in this special category, just as Dr. William H. Sheldon did with early coppers in his Early American Cents book in 1949, designating them as NC. This point of philosophy enables you to ignore the 1894-S and have an otherwise complete collection of available issues. Alternatively, many collectors ignore the 1894-S because it was not a regular issue intended for general circulation. 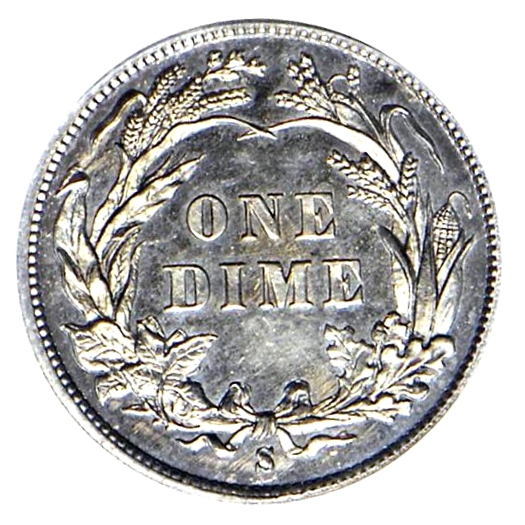 Of the three Barber coin denominations, the dime is most widely collected today. That has been true for past years as well, dating back to the 1930s when Wayte Raymond’s National coin albums and other coin albums were widely sold, and these made it convenient to store and display coins at the same time. Whitman folders entered the scene in 1934, were inexpensive, and did much to boost interest.

As most dimes are well struck, finding choice examples is easier than it is for the quarters and half dollars. Points to check on the dime are the high parts of the hair and leaves on the obverse and the wreath on the reverse. For Mint State and Proof coins, seek pieces that are sharply struck and have excellent eye appeal. A pleasing MS-63 is more desirable to own than a dark or stained MS-65. Some coins that were stored for a long time in Wayte Raymond’s National holders have pleasing, light iridescent toning around the borders caused by sulfur in folders interacting with the coin. Most coins with intense rainbow toning are artificially colored.

If you wish to contact me or send any inquiries, you may direct them to my e-mail qdbarchive@metrocast.net.