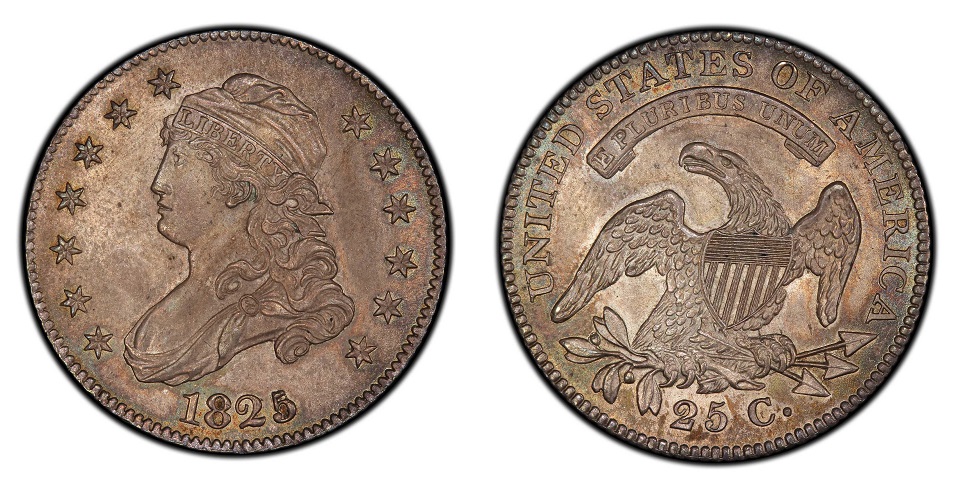 One of the greatest unsolved mysteries, at least for lovers of numismatic esoterica, has to do with a hoard of several hundred or more Extremely Fine to Uncirculated United States silver quarter dollars of the Capped Bust type. The identity of the hoarder is not known today, although in the 1880s some information must have been available to the knowing ones. Above the head of Miss Liberty on these coins is counterstamped either an “E” or an “L.”

These curious quarter dollars bear the dates 1815 (one die variety, known to specialists as Browning-1) and one of the three varieties known of 1825 (B-2, the 1825/3 overdate). During the 1815-1825 period, many different die varieties of quarter dollars were coined, but only these two varieties bearing different and widely separated dates concern us here.

Certain of these two varieties are known today with one or the other two letters, “E” or “L,” carefully counterstamped above and close to Miss Liberty’s head. Most often seen are 1815 quarters with the “E” counterstamp.

The letters are both from related punches — thin cross members and uprights and each with light serifs — and, in view of their relative consistency of impression and location were probably all done by the same person(s) at the same time. Moreover, as only two die varieties are known, and as, presumably, hundreds or more pieces were originally counterstamped, the coins must have been accumulated or stored somewhere and counterstamped not earlier than 1825. If the coins had been retrieved from circulation, other dates such as the large mintage of 1818 and issues through 1824 surely would have been involved. Further, among 1825 quarters there would have been some of the Browning-1 and 3 variety in addition to the counterstamped B-2 examples known to exist of that particular date. Thus, a hoard consisting of Uncirculated coins is indicated.

Karl Moulton, who studied these counterstamps carefully, reported that the first auction appearance he was able to find in an extensive search of catalogs beginning with those published in 1859 was in a Capt. John W. Haseltine sale of December 12, 1881, offering an 1815 quarter dollar with an “E” counterstamp, the coin described as “Uncirculated.” From that time onward, examples in sales have been numerous, and nearly 20 pieces crossed the block in 1882 and 1883. This is rather curious, considering their absence earlier.

Over the years many numismatists have shared theories as to the meaning behind the “E” and “L” counterstamps: (L)atin and (E)nglish school prizes? (L)afayette? (E)rie Canal? (L)ight weight or (e)xtra/(e)xcess weight? (E)conomy, the Harmonists’ settlement in Pennsylvania? Sound confusing? Well, it is — and has been for a long time. What is the answer? At present no one knows. What are your ideas? Sherlock Holmes, where are you?

Gold, Silver and Other Metals Tumble on Week