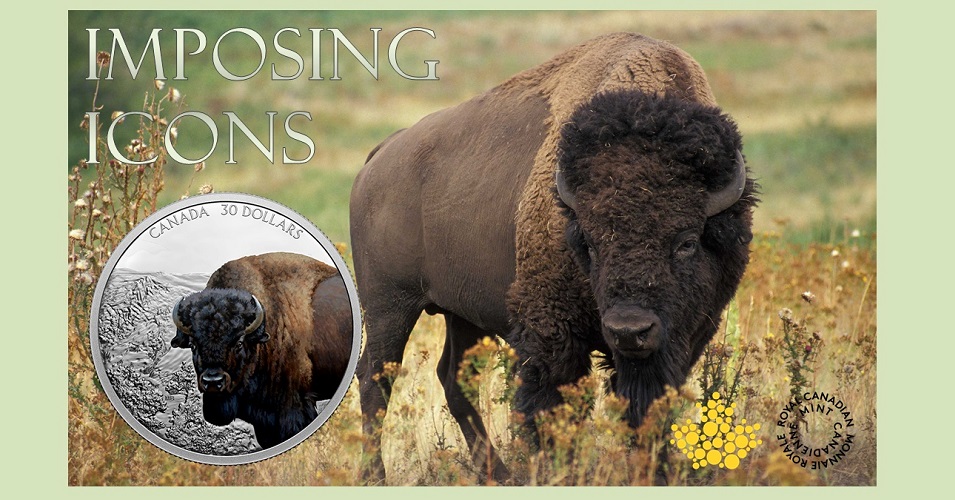 The Royal Canadian Mint has launched the final design which is part of their four-coin series entitled “Imposing Icons.” The series focused on the wildlife endemic to much of the North American continent and which inspires imagery and identity to a vast array of habitats and regions. The last coin features the bison — often referred to as buffalo though the two animals are very distinct with two subspecies in Canada being the wood bison and the plains bison. Along with the European bison, these two sub-species are the largest surviving terrestrial animals from two million years ago to 6,000 BC, when the steppe bison ranged across the mammoth steppe, ultimately inhabiting Europe, Northern Asia, and North America.

Before the settlement of the western region of North America, huge numbers of free-roaming herds of bison dominated the prairies and grasslands. American bison are known for living in the Great Plains, but formerly had a much larger range, including much of the eastern United States and even parts of Mexico. The species was hunted close to extinction during the 19th and 20th centuries, but have since rebounded. This came about when in 1889, with an estimated population of just 1091 animals both wild and in captivity, repopulation attempts were attempted. The governments of Canada and the United States enforced the protection of government herds and extensive ranching and breeding began in 1910 and have continued with excellent success to the present day. Today, the American Plains bison is no longer listed as endangered, but this does not mean the species is secure.

The coin is designed by artist Maurade Baynton whose reverse features a selectively coloured, close-up view of the plains bison. The finely engraved backdrop takes you into the heart of the Canadian Prairies and represents the traditional grassland habitat of this iconic Canadian species. The text CANADA 30 DOLLARS is placed above the primary design.

The obverse features the effigy of Her Majesty Queen Elizabeth II by Susanna Blunt. The year of issue 2021 appears below the Queen’s likeness.

Each $30 coin is individually encapsulated and presented in a Royal Canadian Mint-branded custom case to accommodate its larger diameter and is accompanied by a certificate of authenticity. A case to house all four coins is available for those who subscribe to the series. For more information about these coins and others released by the Royal Canadian Mint, please visit their website.

Other coins in the series include Bighorn Sheep, Moose, and White-Tailed Deer.

Royal Canadian Mint products are available through their retail website and also through a network of independent dealers and distributors.

The Biden Inflation Tax, Made Clear in One Chart