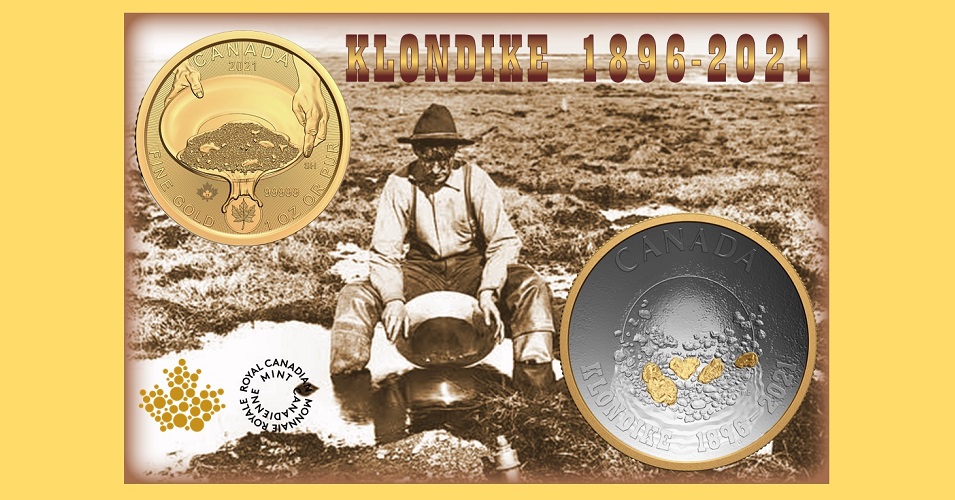 The Royal Canadian Mint has released new silver Proof quality coins with a clever shape in commemoration of the 125th anniversary of the Great Klondike Gold Discovery. This remarkable discovery in 1896 is what makes Canadian folklore so interesting especially for the western provinces.

Long coveted gold was first discovered in the Klondike region in what was then known as “Rabbit Creek.” This discovery was made on that fateful day, 16th August 1896, quite by accident by George Carmack (1860–1922), a down-on-his-luck prospector who had travelled to Alaska from California in 1881. With no luck, he headed to Yukon and by chance, heard of a discovery by another prospector, and, along with two Native American companions, headed to a spot along the Klondike River near Rabbit Creek. Carmack’s luck and life was about to change when he spotted a sizable nugget of gold jutting out from the creek bank.

Gold from the Great Klondike Find made its way to the United States by mid-July 1897 as two steamships arrived from the Yukon to San Francisco and Seattle, carrying a total of more than two tons of gold ready to be minted into coin and bars. All good things, as they say, must come to an end, and this was indeed the case for the Great Klondike Discovery. By 1899, and despite gold still being found, though in much smaller quantities, news of another great discovery in Nome, Alaska, drew many prospectors away from Yukon in hopes of another opportunity to strike it rich.

George Carmack became a very rich man from his discovery, having left the Yukon after mining over 50,000 ounces of gold, then worth $1 million — over $90,000,000 at today’s prices. A village in Yukon was called “Carmacks,” which was named after him and where he first discovered a coal deposit before his large gold discovery. 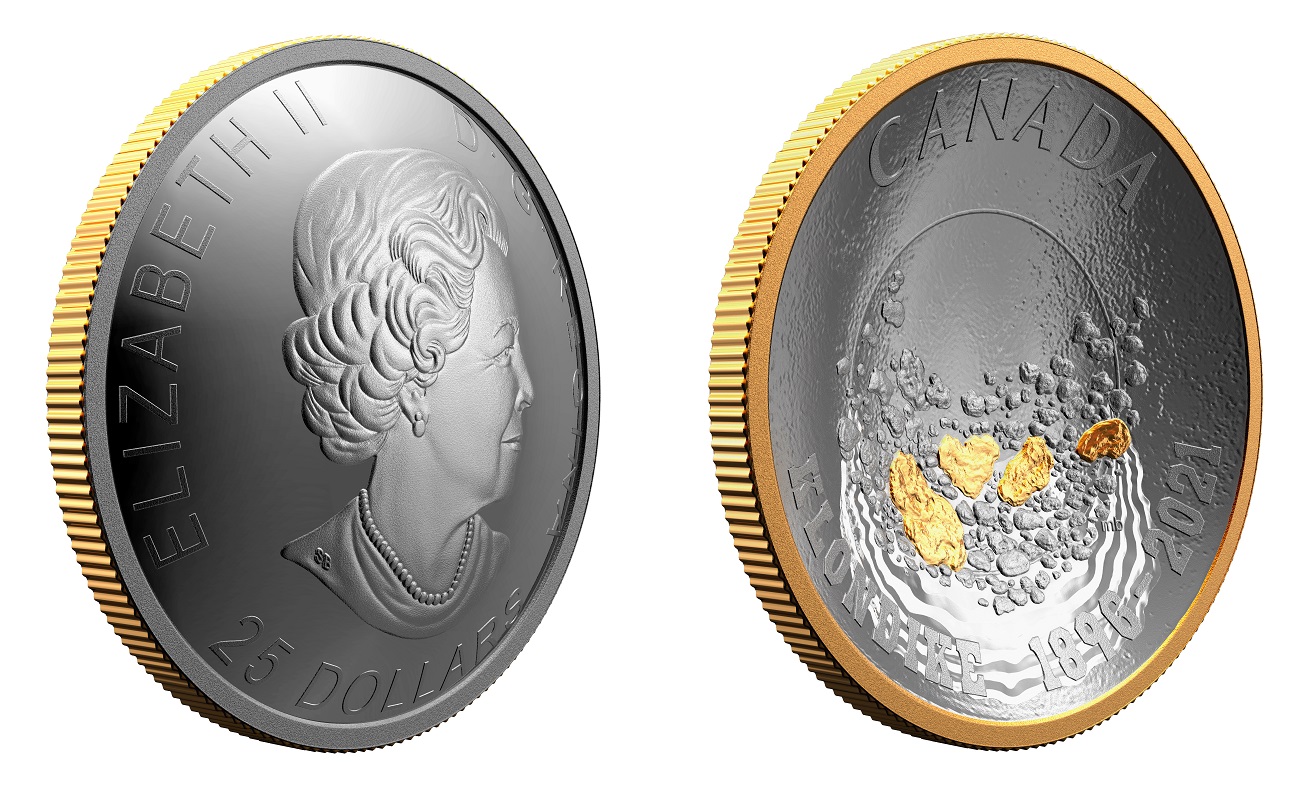 Designed by Matt Bowen, The coin’s reverse is uniquely and cleverly shaped to resemble the familiar dark steel pan used by prospectors, who went panning for gold in the Klondike. Complete with gold-plated nuggets depicted at the bottom of the pan, the dream of every Klondike prospector. The pan-shaped coin re-creates the good fortune and evoking Yukon’s gold rush era. The design is completed with a gold frame and the text CANADA placed above the primary design and the commemorative inscription KLONDIKE 1896 – 2021 is shown below.

The obverse features the effigy of Her Majesty Queen Elizabeth II by Susanna Blunt. The coins’ denomination of 25 DOLLARS is placed below the Queen’s likeness. 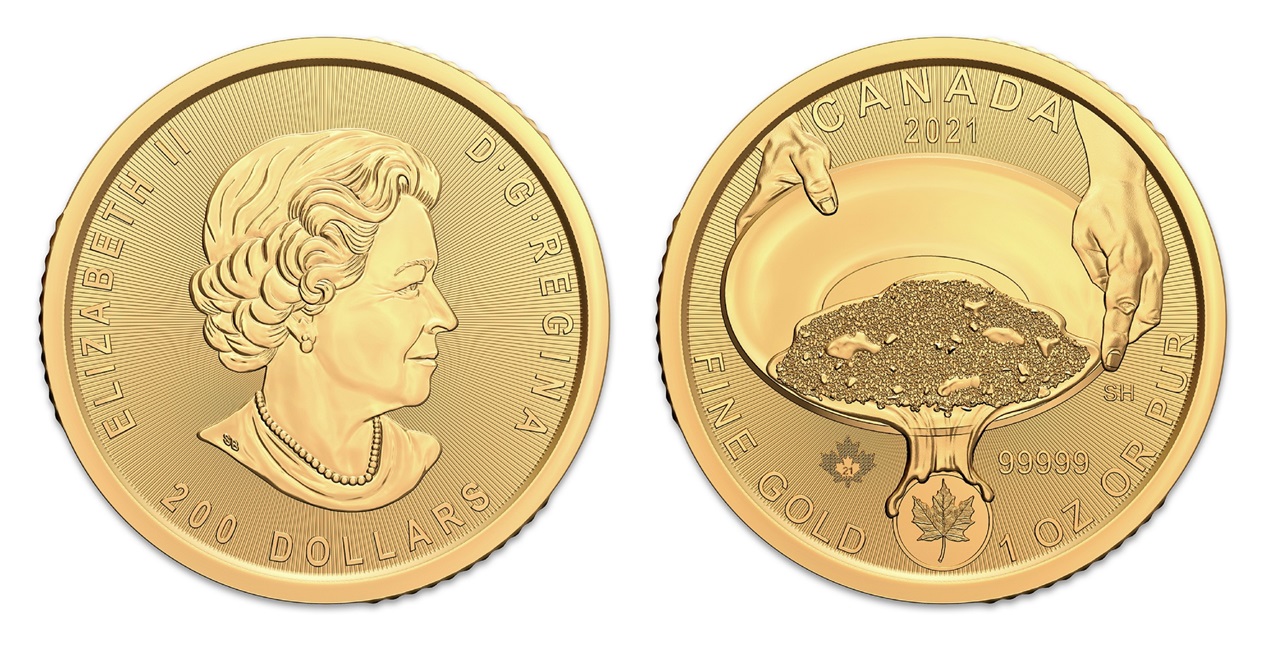 200 dollars gold — A new commemorative one-ounce gold coin struck in bullion quality is released and is the first in a new series of coins to be produced marking the 125th anniversary of the Great Klondike Discovery.

First design, The Panning for Gold: This design features one of the oldest and simplest tools for prospectors seeking their fortune in gold. Known as panning for gold, this requires digging into the dirt in the beds of gold-laden rivers and sifting the dirt in a pan with water to help the gold come to the surface. Above the primary design is the text CANADA and the year 2021. Below is text denoting the coins’ purity 99999 FINE GOLD 1 OZ OR PUR and a micro-engraved maple leaf mark. This privy mark features the last two digits of the year of minting, with those numbers visible only under magnification. The coin’s obverse depicts the effigy of HM Queen Elizabeth II created by Susanna Blunt, which includes radial lines in the background field. The face value 200 DOLLARS is placed below the Queen’s likeness.

Each $25 coin is individually encapsulated to accommodate its concave shape and is presented in a Royal Canadian Mint-branded custom case accompanied by a certificate of authenticity. The Klondike Gold Rush coin, which contains one troy ounce of the purest gold in the world (.99999), is presented in an assay coin-card which serves as the certificate of authenticity. For more information about these coins and others released by the Royal Canadian Mint, please visit their website.

Collectors and investors are advised to contact their local bullion distributor for more information on the Klondike anniversary one-ounce gold coins.

How Our Unfair Markets Use Big Data To Exploit You