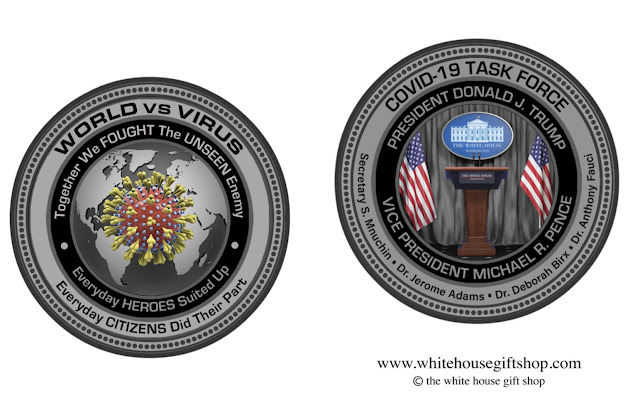 illustration is utilized under FAIR USE DOCTRINE
comments provided below are opinion mixed with sarcasm.

Coming on the success of his injecting disinfectant health recommendations, Trump is now hocking a “Commemorative coin” on the White House Gift Shop site that commemorates a fight that is no where near over, except in his mind.

He is apparently ready to move on like someone with an attention deficit,  despite the massive loss of life (that he has barely expressed regret about except in the most generalized terms). These losses have not been matched for the USA since Vietnam, but the loss of life was incurred in a matter of 15 weeks or less and not 15 years.

Now comes a craven attempt to enrich his campaign (?) at the expense of the American people, and this is true since other campaign items such as slogan hats are also being marketed at the same website possibly in violation of campaign finance laws.

The reality of the American experience of the virus is that the Trump administration has been failing the people of the United States horribly since January 2020 (actually since January 2017). Their lack of planning, securing and guaranteeing food supplies, equipment and supply chains vital to the population and first responders is unconscionable and without precedent in modern American history.  Trump has not been working in sync with any State Governor and in fact has advocated that they go it alone and the Federal Government is a last resort when in fact it should be coordinating all efforts and responses to the viral outbreak and not leaving it to individual states alone to address the crisis.

History will be written by the survivors of Covid-19, and the survivors will likely not be looking kindly on Donald Trump and his self-serving, craven antics, lies and distortions and cowardly lack of leadership in this ON GOING domestic tragedy and international crisis.

Before you waste $100-$125 on this trinket, think about giving that money to your local food pantry, Red Cross, or other charitable entity where the money can be used for the benefit of your fellow citizens and not for the benefit of Trump or his acolytes. For like Trump, this item is poorly rendered, wrought and not representative of the truth we are experiencing.

A correction to the record

Obviously, this is quite misleading and apparently meant to be. Par for the course I say.