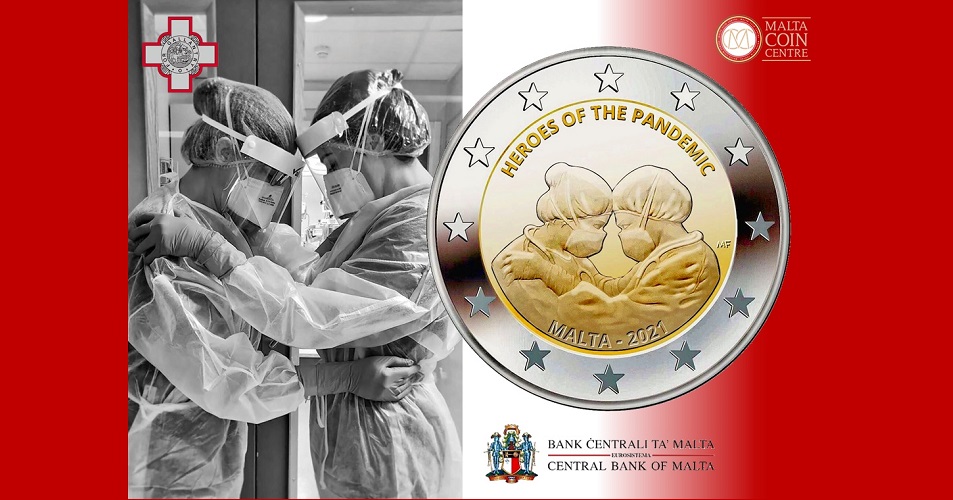 The Central Bank of Malta launched (29th July) new commemorative €2 coins which are in tribute to Malta’s health sector during the COVID-19 pandemic, especially to the frontline medical professionals. The new coins are a symbol of national appreciation of the selfless effort and dedication of the many individuals in Malta who have been at the forefront of the worldwide emergency, risking their own health during such global difficult times.

The coins were launched during an official ceremony with the governor of the Central Bank, Professor Edward Scicluna, presenting the coin card to the Deputy Prime Minister and Health Minister, Hon. Chris Fearne, on behalf of the frontline medical professionals. In particular, senior staff nurses Doreen Zammit and Charmaine Cauchi, who were casually photographed by nurse Diane Faenza, during the height of the pandemic and highlighting the climate of stress, fear, and courage among healthcare workers at the time. Their identities weren’t disclosed, as their faces were hidden behind their personal protective equipment (PPE), but they were locked in a supportive embrace, eyes shut tight, before treating coronavirus patients at Mater Dei Hospital.

This powerful photo of the two Maltese Intensive Treatment Unit nurses that went viral during the outbreak of COVID-19 is reinterpreted on the obverse side of new €2 commemorative coins dedicated to heroes of the pandemic. The coins are produced by the Monnaie de Paris on behalf of the Central Bank of Malta and are designed by Maria Anna Frisone. They were meant for issue in July, but were delayed due to logistical problems at the Monnaie de Paris as a result of the pandemic. The reverse side depicts the standard design for all €2 euro-zone releases.

The new coins will be available in a new style of coin-card and presented in an attractive wallet. For additional information about this commemorative coin released by the Central Bank of Malta, the public is kindly requested to contact the Malta Coin Centre via email at  or by calling (+356) 2550 6006/7/8.

ARE WE READY FOR AN AUGUST SURPRISE? – Silver Doctors