From the Colonel’s Desk: A fine silver commemorative of Daniel Boone 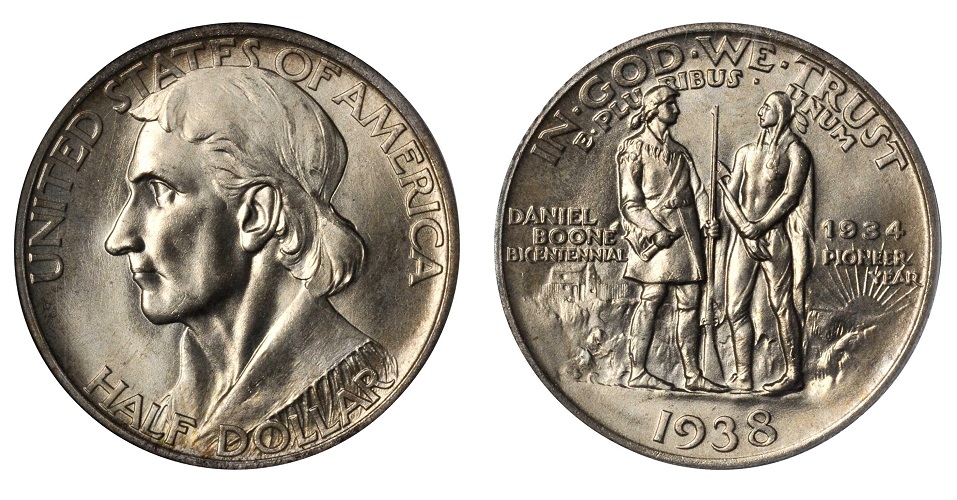 The United States Mint has produced official commemorative coins—legal tender and authorized by Congress—since 1892. The 1930s brought an explosion of such issues, with more than two dozen different silver half dollars issued during the decade. These commemorated expositions, Civil War battles, anniversaries of statehood, even the opening of a bridge. Many of the coins featured portraits of prominent Americans, including General Sam Houston, musician Stephen Foster, and impresario P.T. Barnum. 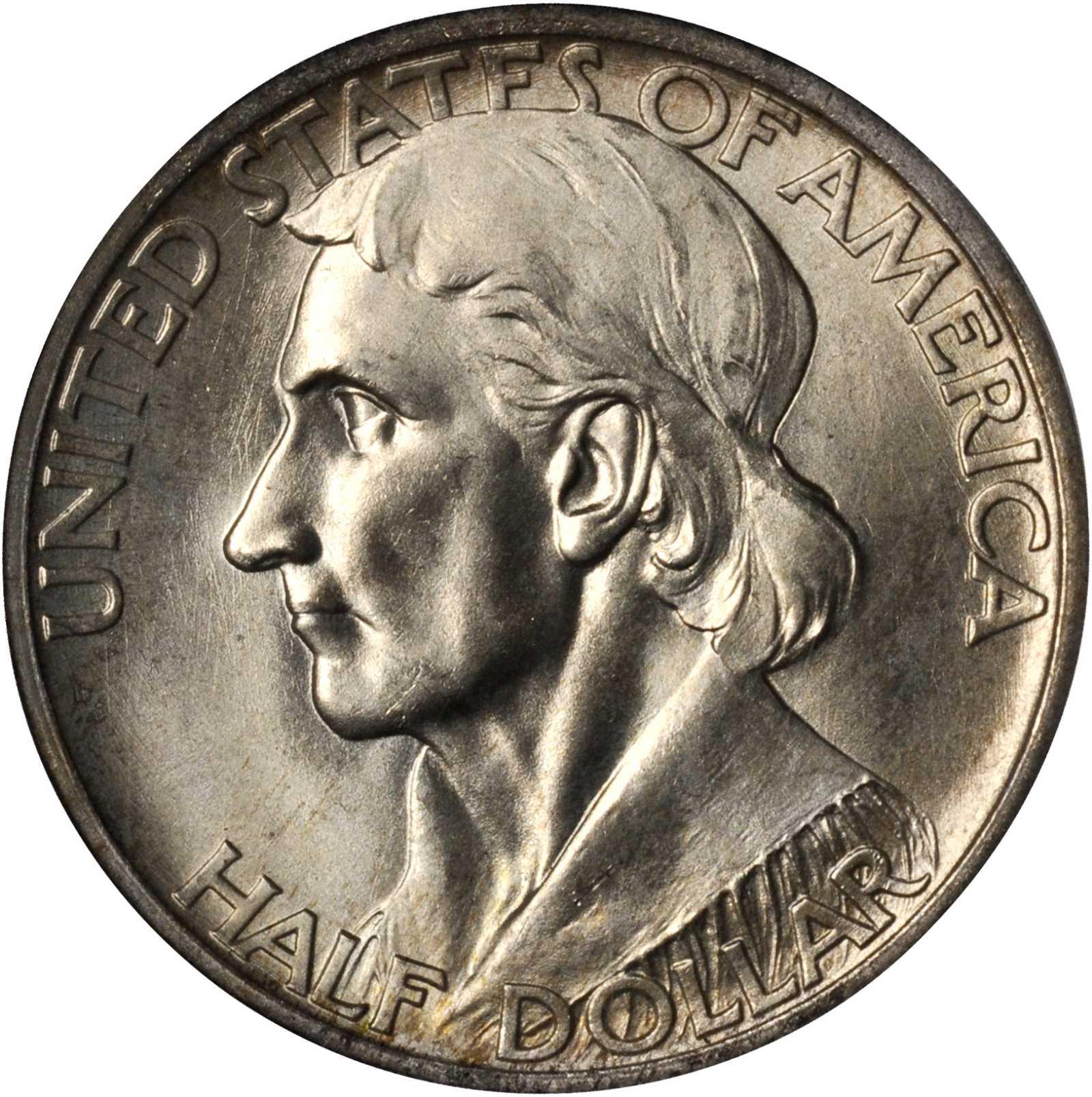 The obverse of the Daniel Boone commemorative half dollar shows the frontiersman in a strong profile portrait by sculptor Augustus Lukeman. The design was from Lukeman’s imagination; no original portrait is known to exist from Boone’s life. (Photo courtesy of Stack’s Bowers Galleries).

One of the longest-running commemorative programs of the 1930s was for a man who explored and settled what today is Kentucky—the “Great Pathfinder,” Daniel Boone. Silver half dollars celebrating the 1734 bicentennial of his birth were minted from 1934 to 1938. All three active U.S. mints (Philadelphia, Denver, and San Francisco) made the coins. 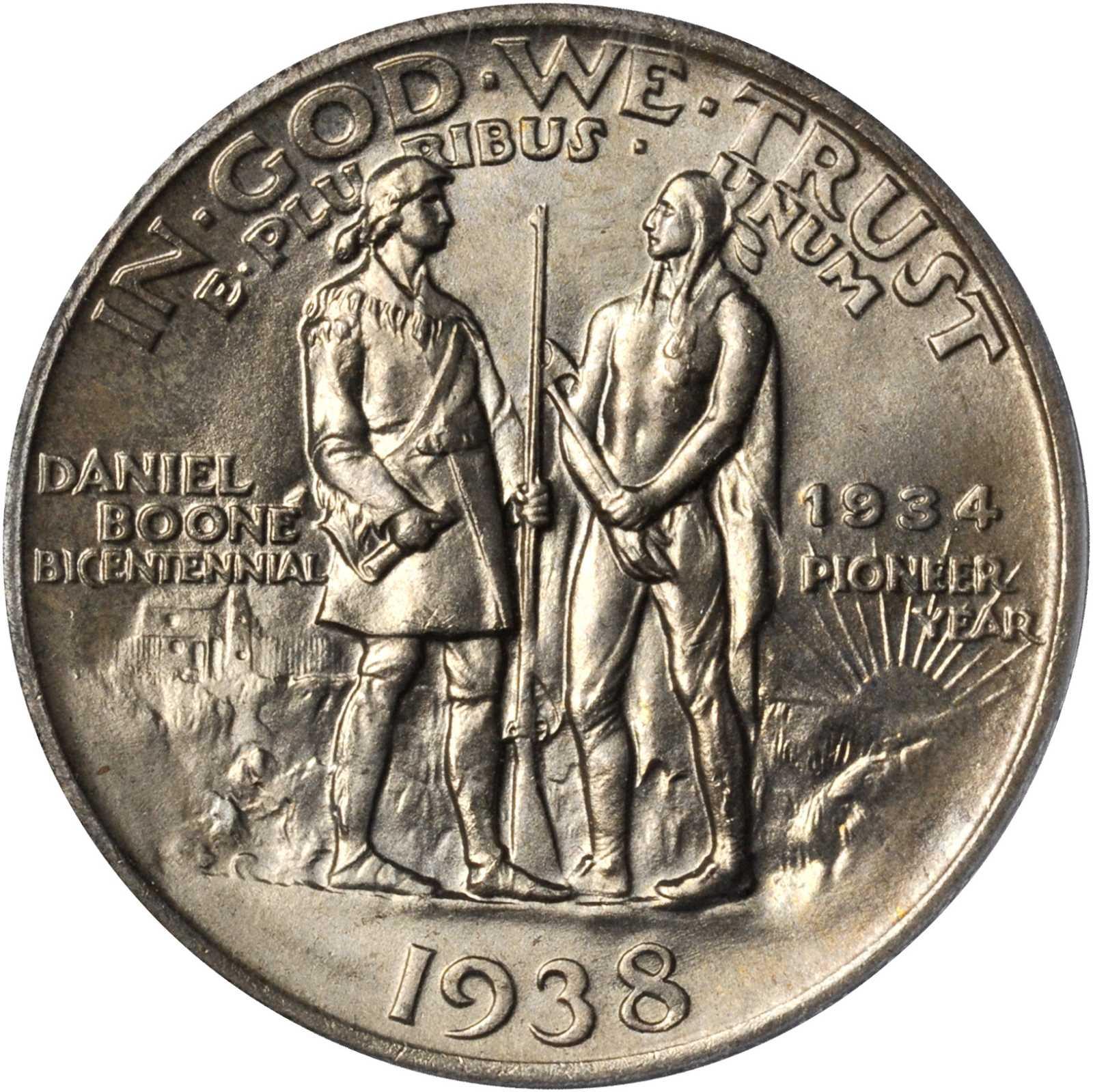 The reverse of the coin shows Boone standing with Shawnee war chief Blackfish, holding in one hand a peace treaty and in the other a musket. (Photo courtesy of Stack’s Bowers Galleries).

In the Guide Book of United States Commemorative Coins, historian Q. David Bowers devotes six-and-a-half pages to the Boone half dollars. (Many other coins earned only a couple pages.) He describes the honoree of the commemoratives thus:

The subject being commemorated, Daniel Boone, was born in 1734 near Reading, Pennsylvania, and by 1752 had moved to North Carolina. He became an explorer and hunter on the frontier. In the late 1760s, Boone explored Kentucky, and in March 1775 he and 30 others cut the Wilderness Road from the eastern region of Tennessee to the Kentucky River, at which point the settlement of Boonesborough was established. During the Revolutionary War Boone was captured by Indians and turned over to the British authorities in Detroit. Released back into the custody of the Indians, he was adopted as a son of Shawnee Chief Black Fish and was given the name of Big Turtle. While thus engaged, Boone learned of a strategy between the British and Indians, who intended to seize Boonesborough. Boone escaped in time to travel 160 miles by foot and warn the Boonesborough settlers, thus allowing them to prepare for the attack. After a series of incidents, Chief Black Fish came to believe that Boone had supernatural powers and opted for peace. In later years, Boone moved several times and served in several sessions of the Virginia legislature. Boone’s skirmishes with Indians and his activities in the Revolution, discussed only briefly here, made him an American folk hero.

Minted only in the thousands, these historic Bluegrass coins are nevertheless very affordable today. If you search diligently and look for high quality in grade and eye appeal, you can find a beautiful Uncirculated example for less than $200. As with any other work of art, of course, exceptional quality comes with a price. For specimens in very high grades, avid collectors will pay thousands of dollars.

Dennis Tucker, Honorable Order of Kentucky Colonels, is the publisher of Whitman Publishing, a leading producer of storage and display supplies, reference books, and other resources for collectors and hobbyists. He was commissioned a Kentucky Colonel in March 2021 for his career in book publishing and his promotion of the Bluegrass State’s status as an important subject in numismatics. His column “From the Colonel’s Desk” explores the Commonwealth’s rich connections to American coins, tokens, medals, paper money, private currency, and related artifacts.

Chanos says retail investors may be left holding the bag