Home » Coin » From the Colonel’s Desk: Millions of dollars from Louisville—but few to be found
Coin

From the Colonel’s Desk: Millions of dollars from Louisville—but few to be found 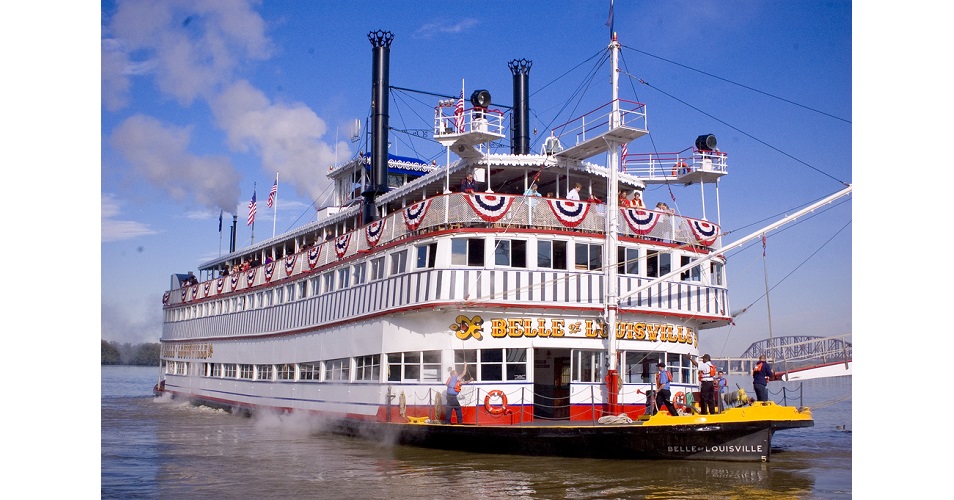 The steamboat Belle of Louisville, built in 1914 and today owned and operated by the City of Louisville, Kentucky. (Image courtesy of Bo, via Flickr / Wikimedia Commons)

The tourism board of Louisville, Kentucky, has a playful warning for visitors: You might love the city so much, you’ll want to move here.

Churchill Downs, the Louisville Slugger Museum & Factory, the Muhammad Ali Center, local cuisine, the “urban bourbon” experience, and other attractions make the Gateway to the South a charming place that is uniquely Kentuckian.

This $5 Proof note, circa late 1830s to early 1840s, was made on India paper and mounted to archive-page paper. State-chartered banks had Proofs made to test new designs or illustrate how a note made for circulation would look. This particular Proof, from Louisville’s Bank of Kentucky, features a strange and wondrous combination of vignettes! George Washington is dressed up as a Roman . . . a frontiersman rests on a downed stag . . . a bashful cherub holds aloft the denomination “FIVE” . . . and Henry Clay and Governor Isaac Shelby stare with looks of amusement at the viewer. This interesting piece of Kentucky banking history sold for $345 in 2011. (Image courtesy of Stack’s Bowers Galleries)

Naturally, the largest city in the Commonwealth has hosted its share of banking and finance over the years. Kentucky’s state-chartered banks from the early 1800s to the 1860s were authorized to issue their own paper money, backed by the value of their assets. More than a dozen banks had their headquarters in Louisville or opened branch offices there. This gives collectors many colorful Louisville banknotes to hunt down and marvel at. Their beautifully engraved and creative vignettes are among the most artistic in American banking history.

Notes that passed hand-to-hand in commerce are rarely seen in as fine condition as Proofs made in small quantities as test pieces. This $10 Proof of the second Bank of Kentucky, Louisville, illustrates the exquisite art of the banknote engraver. Daniel Boone, wearing a fur-trimmed coat and a somewhat morose facial expression, stands at the left. In the center a horse-drawn Roman chariot accompanied by cherubim flies across the sky, welcoming the dawn. At the upper right, a Native American navigates his canoe along a riverbank. In 2011 this note sold at auction for $488.75. (Image courtesy of Stack’s Bowers Galleries)

One such institution was the “first” Bank of Kentucky (sometimes called the “Old” Bank of Kentucky), incorporated in December 1806. The Commonwealth itself subscribed to half of this bank’s capitalization of $1,000,000. Louisville was one of its main branches, opened in 1807 and given $400,000 of capital, with the rest divided among the parent bank in Frankfort and other branches in Bardstown, Danville, Glasgow, Hopkinsville, Lexington, Paris, Richmond, Russellville, Shelbyville, Springfield, Washington, and Winchester. The first Bank of Kentucky operated until the early 1820s.

The Commonwealth chartered the second Bank of Kentucky (sometimes seen in print as the “New” Bank of Kentucky) in 1834 in order to carry on the business of its predecessor. This new firm was headquartered in Louisville, and capitalized to the remarkable tune of $5,000,000. The bank made important loans to the city to build its railroad infrastructure and other properties.

The second Bank of Kentucky had branches in more than a dozen other towns and cities, and it issued millions of dollars in banknotes. Q. David Bowers, in the Whitman Encyclopedia of Obsolete Paper Money, volume 7, tells of a fraud that occurred in 1852: someone stole printing plates for the bank’s $10 notes, and used them to illegally print a large batch of “new” paper money. Bankers’ Magazine reported that “The theft was managed so adroitly that no clue can be obtained to its discovery, or to lead to the detection of the perpetrator. The plates were stolen from the engraver in Cincinnati.”

Unrelated to that particular misadventure, by the end of the Civil War most state-chartered banks in America were shutting down, to be replaced by a new system of National Banks. In January 1866 most of the Bank of Kentucky’s branches were closed, and the parent bank was wrapping up its affairs. The bank had served its charter well. Its currency notes circulated far and wide. They were workhorses—printed not for collectors, but to pull the wagons and tote the barges of American commerce. As a result, few were saved for posterity, and today notes of the second Bank of Kentucky and its branches, including Louisville, are rare. Collectors seek them out for their scarcity, their rich history, and their eye-popping vignettes and engravings.

Dennis Tucker, Honorable Order of Kentucky Colonels, is the publisher of Whitman Publishing, a leading producer of storage and display supplies, reference books, and other resources for collectors and hobbyists. He was commissioned a Kentucky Colonel in March 2021 for his career in book publishing and his promotion of the Bluegrass State’s status as an important subject in numismatics. His column “From the Colonel’s Desk” explores the Commonwealth’s connections to American coins, medals, tokens, paper currency, privately issued paper money, and related artifacts.

Time is Running Out for the Banks – Silver Doctors