Italy: Gold and silver Proof coins issued to honour Renaissance artist Caravaggio on the 450th anniversary of his birth 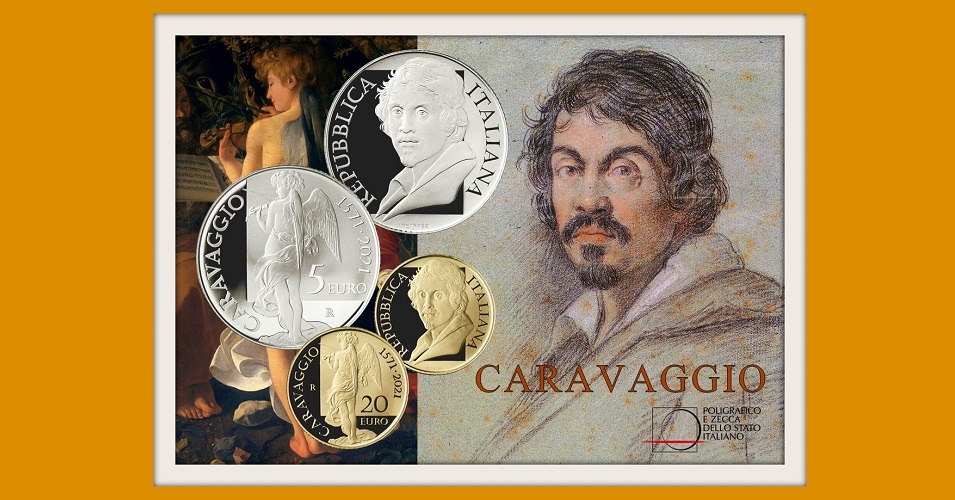 The Istituto Poligrafico e Zecca dello Stato (IPZS) has issued (1st September) new gold and silver collector coins in honour of the 450th anniversary of the birth of one of the greatest painters of the Renaissance era, who was as immensely talented as he was controversial. Born on the 28th September 1571, Michelangelo Merisi was born in Milan to Fermo Merisi, an architect-decorator to the Marchese of Caravaggio and Lucia Aratori. Caravaggio appears to have stayed in the Milan-Caravaggio area after his apprenticeship ended until he had to flee Milan for Rome in mid-1592 after a series of quarrels and the wounding of a police officer. It was at this time when the 21-year-old Michelangelo took the name Caravaggio, which became his permanent persona. Specialising in still life of fruits and flowers, and later, painting half-length figures of models he met in various settings which he sold on the street, it would be another three years before he would receive his first break.

As he was essentially the most famous painter in Rome, Caravaggio went on to secure a string of prestigious commissions for religious works. For the most part, each new painting simply increased his fame, owing to the realism and colour intensity seen in his works. However, some were rejected by the various bodies for whom they were intended and for the same reason, they were admired. Caravaggio’s dramatic intensity was appreciated but his realism was seen by others as unacceptably vulgar.

Having been well-known during his own lifetime for leading a tumultuous life, in the early years of the 17th Century, he was charged with criminal behaviour on no less than 11 occasions. Some of the charges were as innocuous as swearing at a constable or penning satirical verses about a rival painter to throwing a plateful of artichokes in a waiter’s face. However, Caravaggio faced the ultimate charge of law-breaking when in May 1606 he was forced to flee Rome, after killing a man during a brawl. Recorded text of the court report suggests the quarrel broke out over a gambling debt. He spent the rest of his life on the run making his way to Malta then Sicily where he did continue to work, far enough from the jurisdiction of the Papal authorities. While on his way back to Rome after he learned that he had received his sought-after pardon, Caravaggio fell ill, perhaps with malaria, and died a few days later. He was just 39 years old. Researchers today hypothesise Caravaggio may have had his death hastened by lead poisoning as the paints he used were heavily laden with high contents of the toxic metal. Caravaggio may have quite literally died for his art. His remains were buried in a small cemetery in San Sebastiano, Port Ercole. The same cemetery closed in 1956 and remains that were believed to be his were then transferred to the St. Erasmus cemetery. Anthropologists started their investigation in December 2009 in one of the cemetery’s three crypts and accurately identified remains one year later. In 2014, they were re-interred in a memorial crypt located in the former San Sebastiano cemetery and its construction was inaugurated on the 18th July 1610 — exactly 400 years after his recorded death. In tribute to the exceptional talent and brilliance of Caravaggio, his likeness was included on Italy’s last version of 100,00-lire banknotes in use from 1994 to 2002.

The gold and silver Proof-quality coins are produced by the the Istituto Poligrafico e Zecca dello Stato (IPZS) at their facilities in Rome and are designed by artist Silvia Petrassi, who features on the obverse the casual portrait of Caravaggio, drawn in pastels by the painter Ottavio Leoni (1578–1630), and is now displayed at the Biblioteca Marucelliana, Florence. The image is surrounded by the text REPUBBLICA ITALIANA on each side along the edge and the name of the artist PETRASSI is placed just under the image of Caravaggio.

The reverse side includes the main element from the painting of Caravaggio’s Rest during the flight into Egypt datable to 1597 and part of the collection of the Galleria Doria Pamphilj, Rome. Shown is an angel from behind with large swallow wings playing the violin. Along the left edge is the word CARAVAGGIO together with the letter R identifying the Mint of Rome, and is seen on the gold coin. On the right edge are the commemorative years 1571 – 2021 with the coins’ denomination of 20 EURO (gold) or 5 EURO (silver). The R mintmark is shown under the denomination on the silver examples.

Each coin is individually encapsulated and presented in a custom IPZS-branded case accompanied by a certificate of authenticity. For additional information about these coins and others available from the Istituto Poligrafico e Zecca dello Stato (IPZS), please click here.

Silver Miner in Australia Is Betting Solar Will Drive Demand

The world is awash in dollar liqudity that no one wants