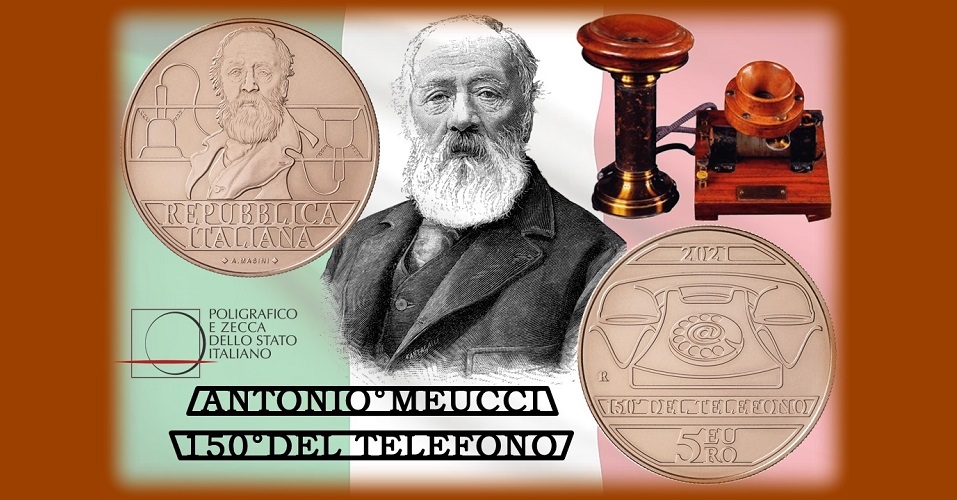 The Istituto Poligrafico e Zecca dello Stato (IPZS) has issued new €5 collector coins which pay homage to Antonio Meucci (1808–1889), the man whose insight into electronic communications and whose invention is considered the precursor to the telephone. The coins mark the 150th anniversary since the application to patent his device in 1871 was filed in the United States. The origins of the concept of transmitting voice over electronic current have been credited to Meucci, although the invention of the telephone device and its development was attributed to Alexander Graham Bell since 1876. Despite his submission of a patent caveat for his telephonic device to the U.S. Patent Office in 1871, there was no mention of electromagnetic transmission of vocal sound in his caveat and that sound is converted to variable electrical conduction in the wire. As such, Meucci omitted the most important description of his device, resulting in his caveat never having become a patent because it never succinctly described the working function of a telephone powered by an electromagnetic current.

However, recognition of Meucci’s work in the past came from the International Telecommunication Union, positing that Meucci’s work was certainly one of the four precursors to Bell’s telephone. Later recognition emanated from the Smithsonian Institution, which listed Meucci as one of the eight most important inventors of the telephone in an exhibition arranged on the occasion of the centenary anniversary of the Bell telephone in 1976.

Designed by Annalisa Masini, the obverse side of these copper strikes includes a portrait of Antonio Meucci that is based on a lithograph modelled after a photograph believed to have been taken just after his arrival in the United States. In the background, to the left and right of Meucci’s front-facing portrait are replica images of the earpieces used as part of his telettrofono invention facing up and down, connected by a single wire. The text REPUBBLICA ITALIANA is arranged in two lines of text with the name of the designer of the coin A MASINI placed below. The composition of the design on the reverse side is inspired by the characteristic pay-telephone token of Italy and depicts a vintage telephone in use between the 60s and the early90s. Centred on the dial face is the @ insignia, which is symbolic of e-mail and the Internet. Behind the telephone and in the centre of the coin are electromagnetic waves in reference to Meucci’s earlier experiments with electrotherapy. Above the primary design is the year of issue 2021 and below the telephone is the stylised text 150 ° DEL TELEFONO. The coins’ denomination of 5 EURO is beneath the text and to the left is the mintmark letter R denoting the Mint of Rome.

The coin is presented in a card format with illustrations and informative text included as part of the packaging. For additional information about this coin and other coins on offer from the Istituto Poligrafico e Zecca dello Stato (IPZS), please visit their website.

Evergrande Isn't China's "Lehman Moment." It Could Be Worse than That.