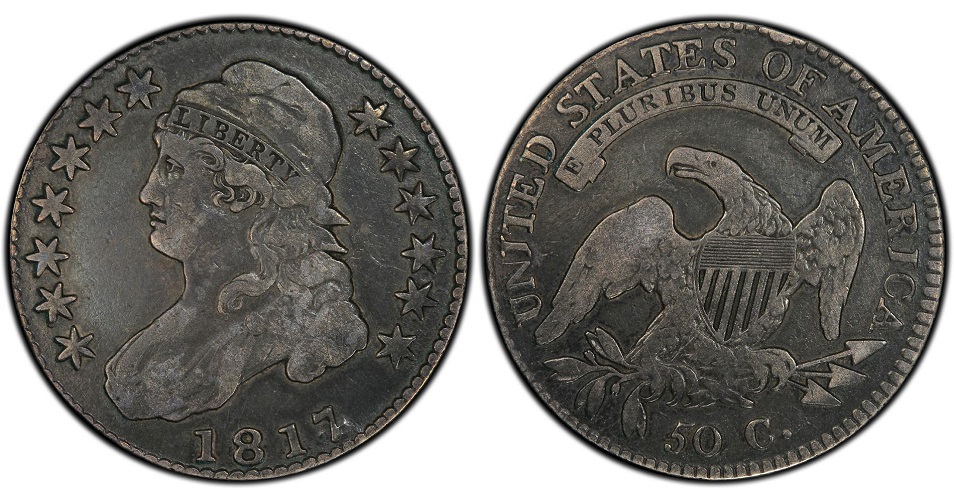 The 1817/4 Capped Bust half dollar overdate in PCGS F15 is one of numerous amazing and rare coins to be sold among the Chicago Collection of Early Half Dollars in Regency Auction 47 in August by Legend Rare Coin Auctions. Courtesy of PCGS TrueView. Hover to zoom.

Legend Rare Coin Auctions is proud to announce the Chicago Collection of Early Half Dollars, which includes the #1 PCGS Registry Set of Early Half Dollars and a complete Red Book Variety Bust Half Set. This incredible collection features over 30 coins that are at least tied for finest-known honors at PCGS, including an astounding 25 that are the single-finest known at the service. Overall, this stellar collection is worth well over $3,000,000, according to the PCGS Price Guide. In addition to the 101 coins that comprise the Registry Set, the collection also features several additional interesting varieties that add to the appeal of the collection.

“Starting with the very first coin, the 1794 PCGS AU-58, every coin in this incredible collection is impressive, and you can clearly see the attention and care that was put into completing this set,” stated Laura Sperber, founder of LRCA. “This is clearly a world-class Bust Half collection and fully deserving of its status as the number-one PCGS Registry Set.”

“This collection is extremely fresh to the market,” echoed Matthew Bell, CEO of LRCA. “Going through the coins, it is amazing how many incredibly eye appealing coins have been assembled. We are truly honored to have been chosen to bring this collection to auction.”

Highlights abound in the collection. Some of the stellar standouts include:

Additionally, this collection features the 50C 1817/4 in PCGS F15, one of only 11 examples known of that overdate. Having any example in a collection is a massive achievement, and this coin is one of just seven graded by PCGS.

The entirety of the Chicago Collection of Early Half Dollars will be sold at the Regency Auction 47 on September 2 in Las Vegas. Prior to that, highlights of the collection will be on display at the American Numismatic Association World’s Fair of Money this August. Consignments are still open for Regency Auction 47. Contact Legend Rare Coin Auctions at 732-935-1168 or at info@legendauctions.com for more information.

Legend Rare Coin Auctions is a boutique numismatic auction company specializing in the finest and rarest U.S. coins. Founded in 2012 by Laura Sperber, the owner and president of Legend Numismatics, the premier rare coin retail firm. LRCA was, from the outset, designed to be a different kind of rare coin auction firm. LRCA’s staff of numismatic auction industry veterans include Julie Abrams, president; Greg Cohen, senior numismatist; and Jessica Berkman, consignment coordinator. The firm’s Regency Auctions serve as the official auction for the PCGS Members’ Shows. Since its founding, LRCA has sold many important collections, resulting in world-record prices, including the Coronet Collection of Morgan Dollars the David Hall—Bob Simpson Collection of Liberty Head Eagles; the Sunnywood-Simpson Collection of Morgan Dollars; the Phil Flannagan Collection of Territorial Gold, Toned Dollars, and 1795 coins; duplicates from the Gerald Forsythe Collections of Buffalo Nickels and Mercury Dimes; the Bob Simpson Collection of Standard Silver Patterns; the Northern Lights Collection of Monster Toned Morgan Dollars; the Crow River Collections of Indian Head $10s and Peace Dollars; the Konstantine Collection of Capped Bust Half Dollars, the #1 PCGS Set of Red Book varieties, 1807-1836; the BigMO Civil War Set; and the Bruce Morelan Collection of Early Dollars and Early Type Coins. To consign to an upcoming auction, click here and contact a consignment specialist today.

Peter Schiff: The Jobs Report Was Weaker Than Headlines Suggest