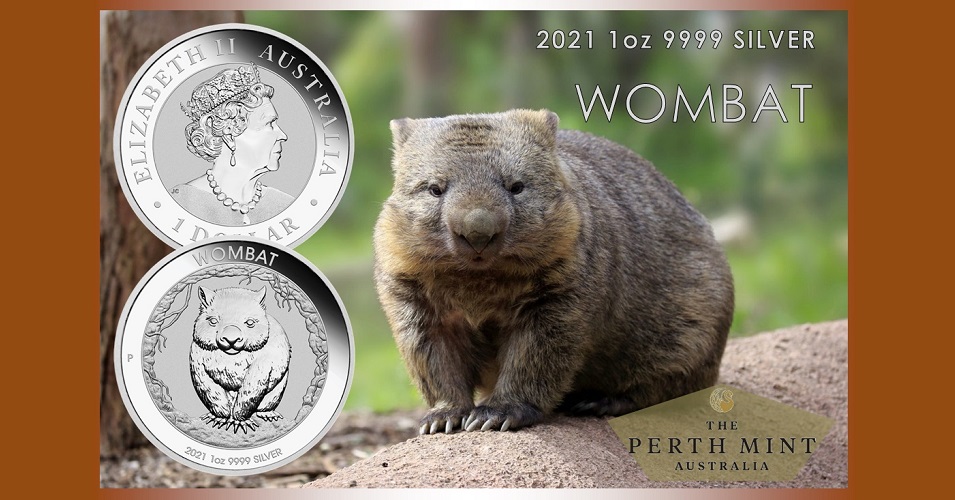 The Perth Mint has released, for the first time, 2021-dated silver one-ounce bullion coins featuring the Australian wombat, which is now added to their range of bullion coins celebrating iconic Australian marsupials. For those not quite familiar with wombats, they are furry, short-legged, muscular four-legged animals that are native to Australia and surrounding islands. Measuring about one metre (40 inches) in length with small, stubby tails, they weigh between 20 and 35 kilograms (44 and 77 pounds). There are three extant species — the common wombat, northern hairy-nosed wombat, and southern hairy-nosed wombat, who are all members of the family Vombatidae. With powerful limbs and sharp flat claws, wombats are ideally built for digging rather than climbing trees. They are also herbivores, meaning they only eat vegetation. Some common meals for a wombat include roots, grasses, scrub, herbs, and bark. They get most of their water from the foods they eat and can live years without drinking water.

They spend the majority of their time underground and are one of the largest burrowing animals in the world. Like kangaroos and koalas, the wombat is a marsupial that nurtures its young inside a pouch. However, unlike its other marsupial cousins, the female’s specially adapted backwards-facing pouch accessed from the rear is the way it is because this anomaly protects its young during tunnelling. Although wombats are naturally very shy, they are inquisitive and have been known to become friendly with humans. Wombat handlers have observed they can be rather obstinate, and once their mind is made up, will stop at nothing to get what they want.

Believe it or not, these cute, cuddly marsupials are also known for another interesting phenomenon unique in the animal world, and that is their six-sided cube-shaped droppings. First is the explanation of how is this done, then why will be explained further on. A team of U.S. mechanical engineers and Australian biologist researchers have concluded that the varying elastic properties of a wombats’ intestinal walls allow for the cube formation. Unusual in nature, but which they produce prolifically, wombats can “drop” between 80 and 100 cubes each night. Now the second part of the explanation of why is this particular oddity found in the world of the wombat. Well, everything in nature has a purpose, so does this, and that important function apparently allows for wombats to pile their droppings high above ground as a way of marking their territory and communicating through scent. Quite practically, the pellets’ flat sides enables them to be placed prominently on logs and rocks without rolling away, and thus, they are also more likely to catch the eye of a mate. 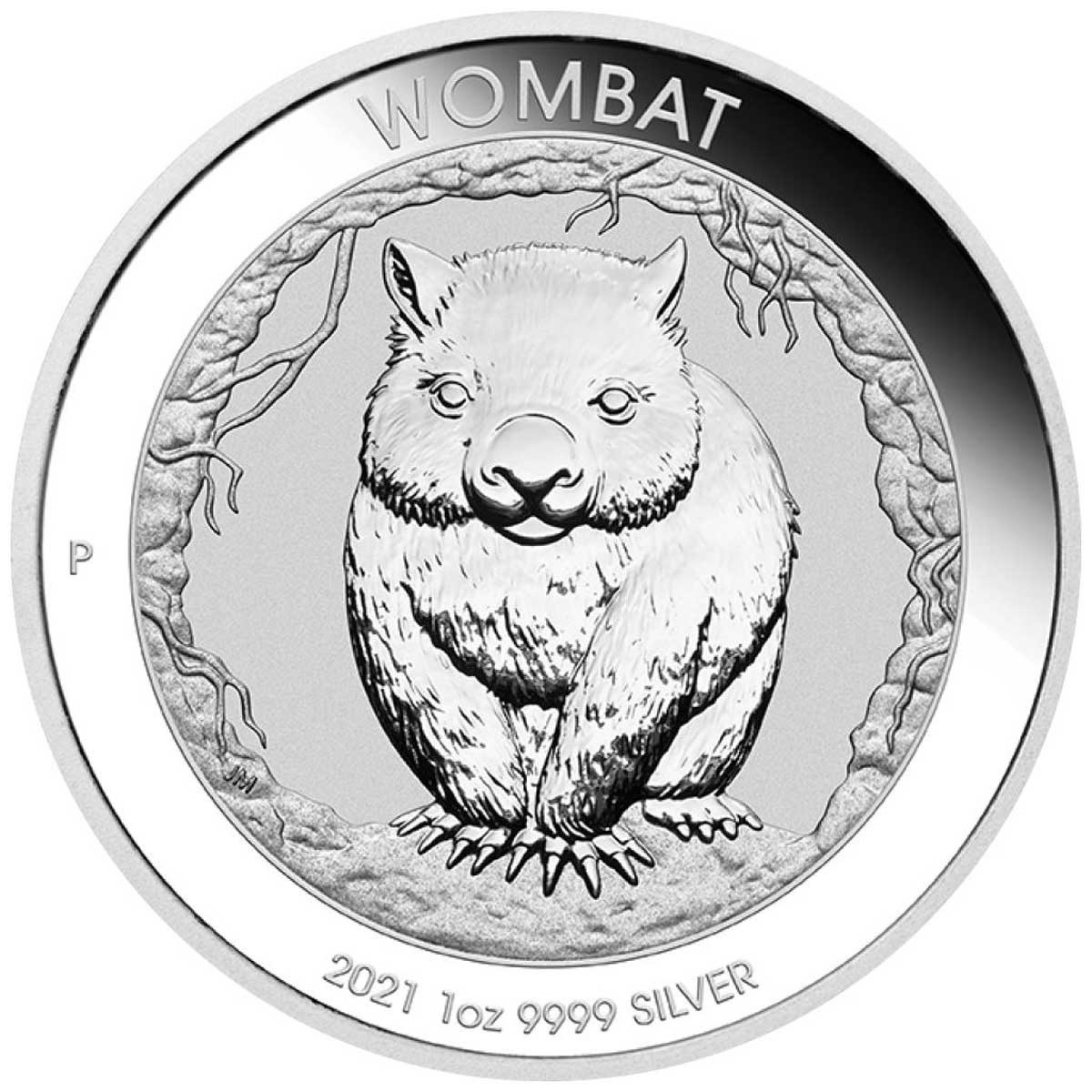 Designed by graphic artist Jennifer McKenna, the reverse side of the coin features a large image of an adorable front-facing wombat seated on a small dirt mound beneath ground within its burrow. The burrow and tunnel show the surrounding soil and roots that maintain the integrity and support of the burrowed structure. The inscription WOMBAT is placed above the primary design with the specifications 2021 . 1oz . 9999 . SILVER shown at the bottom rim. The Perth Mint’s “P” mintmark is seen to the left edge. The coin also includes an authentication feature on the reverse in the form of a micro-laser engraved letter. The security feature is designed to make it significantly more difficult for the coin to be counterfeited. 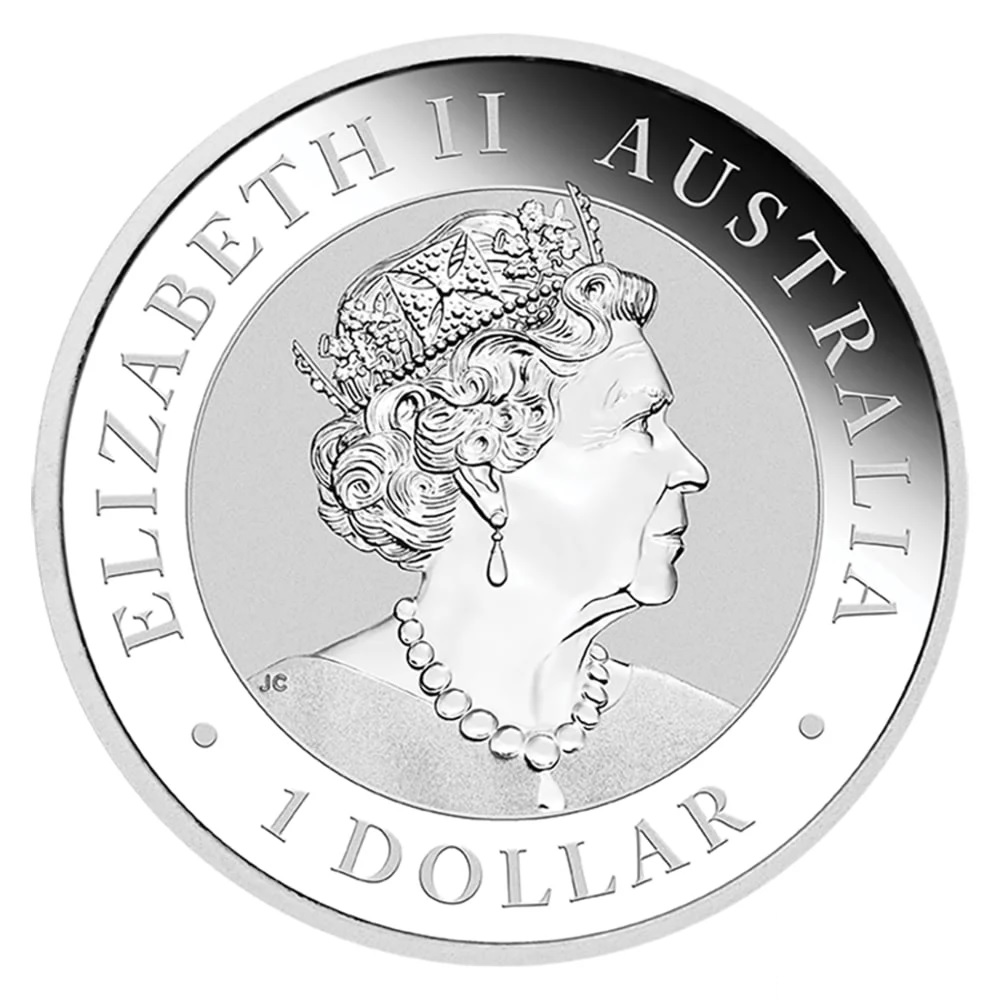 The obverse side depicts the Commonwealth effigy of HM Queen Elizabeth II created by British engraver Jody Clark. The denomination of 1 DOLLAR is included beneath the Queen’s likeness.

Each Wombat 2021 one-ounce silver bullion coin is presented in an individual protective acrylic capsule. The coins are available through a network of international bullion distributors. For additional information and to find a local distributor, please visit the website of the Perth Mint.

Quitting QE may be harder than the Bank of England believes

The Allegory of a Nation