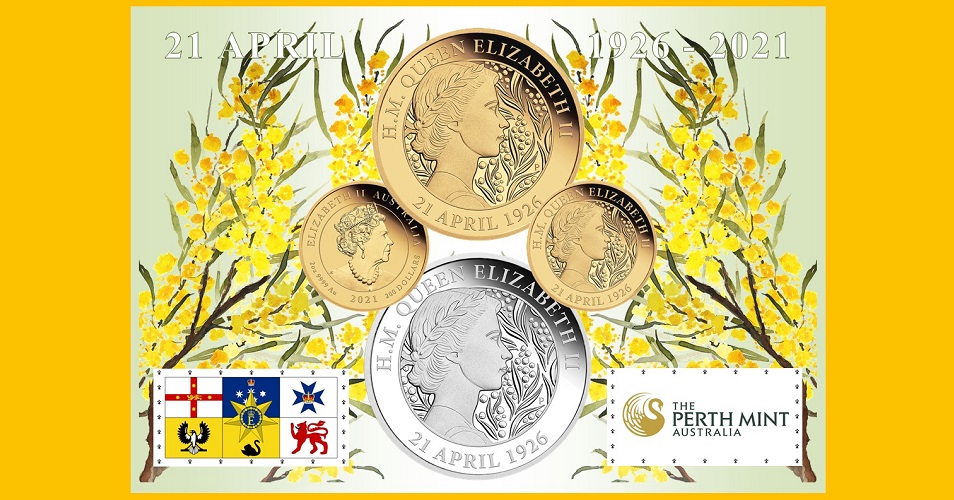 The Perth Mint has released gold and silver Proof collector one-ounce coins in celebration of the 95th birthday of Queen Elizabeth II who, aside from being sovereign of the United Kingdom, is also Queen of Australia. Since 1788, Australia was claimed as a territorial possession by the British with direct rule from London. The first immediate member of Britain’s Royal Family to visit Australia was Prince Alfred, Duke of Edinburgh, the second son of Queen Victoria, in 1867. It wasn’t until 1901 when the six separate self-governing colonies in Australia formally federated to form the Commonwealth of Australia — later the Dominion of Australia. With federation, Australia recognised the British sovereign as Australia’s own head of state. From the time of the reign of King Edward VII, successive British sovereigns have been recognised as Australia’s monarch and since her accession to the British throne in February 1952, Queen Elizabeth II also became Australia’s head of state. She, along with her husband Prince Philip, the Duke of Edinburgh, embarked upon their first royal visit in February 1954 and she became the first reigning British monarch to set foot on Australian soil. While resident in Australia, the Queen’s title is “Elizabeth the Second, by the Grace of God Queen of Australia and Her other Realms and Territories, Head of the Commonwealth.”

During this exhaustive tour, the Queen formally opened the Australian Parliament in Canberra. After which, she travelled 10,000 miles by air, involving approximately 33 flights, she travelled 2,000 miles by road, totalling 130 hours in cars in 207 separate trips and visited all capitals except Darwin, along with 70 country towns, many by special “royal trains.” It was estimated that nearly 75 percent of the Australian population caught a glimpse of the Queen during the 58-day visit. Subsequently, Queen Elizabeth II visited Australia a total of 16 times, the last occurring in 2011 and which many Australians regarded as her “farewell tour,” since it was unlikely she would again fly the nearly 22-hour journey. During her 16 journeys, the Queen has visited every Australian state and the two major territories. While in Australia, Her Majesty also displays a special Australian standard, which features one section for each of the six Australian states. 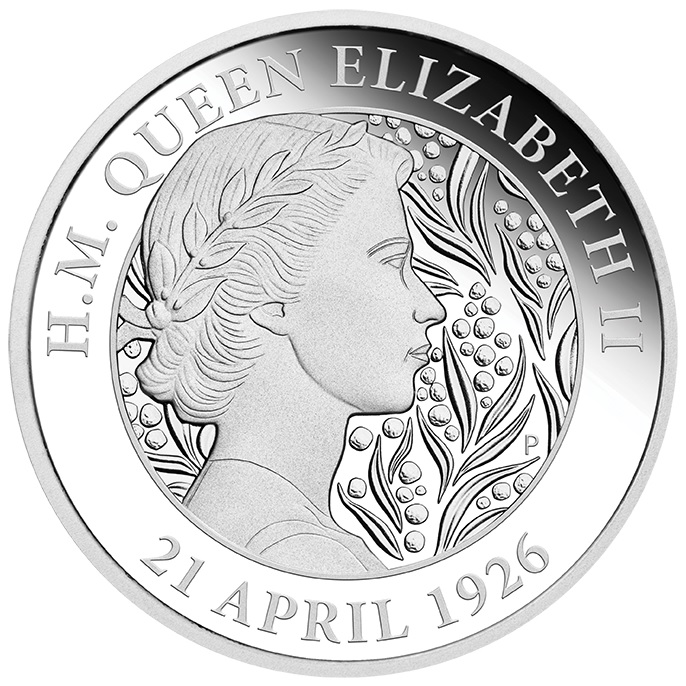 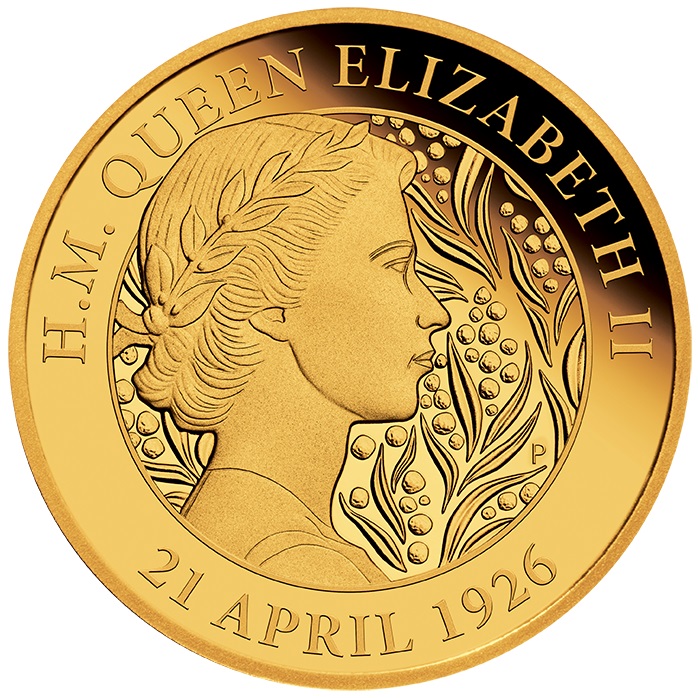 The design on the reverse side of both the gold and silver coins features the first effigy of Queen Elizabeth II which was used on British and Australian coinage from 1953. Created by British sculptor Mary Gillick, the Queen is shown wearing a garland of laurel leaves on her head and positioned towards the left side. In the background, is a stylised illustration of golden wattle, Australia’s national flower. Above the primary design is the inscription H.M. QUEEN ELIZABETH II and below is her birthdate of 21 APRIL 1926. 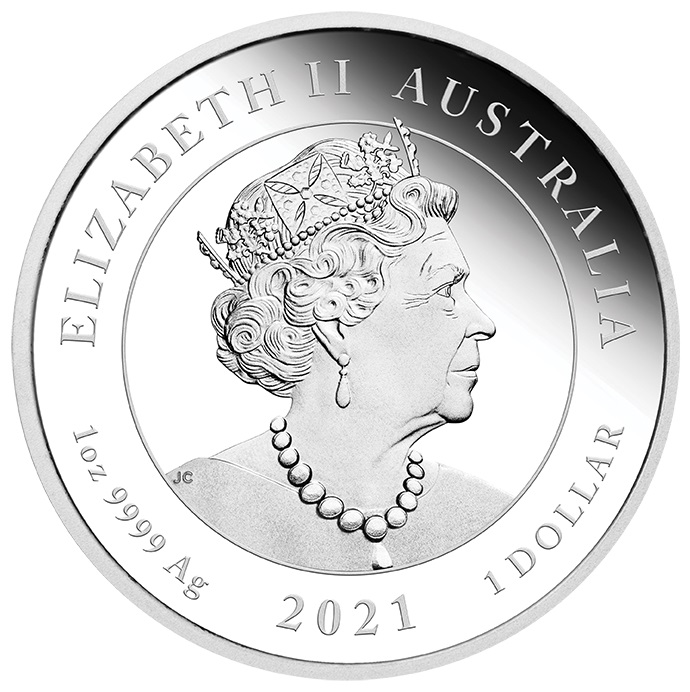 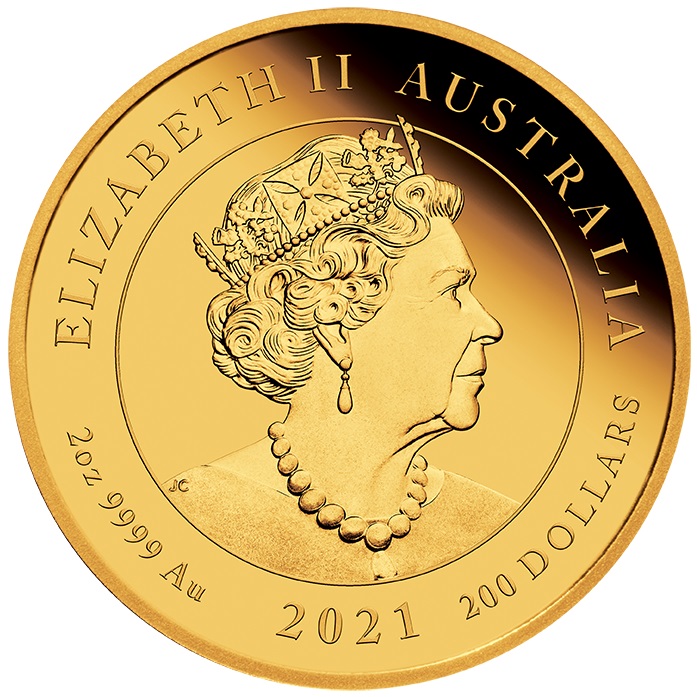 The Commonwealth effigy of HM Queen Elizabeth II created by British engraver Jody Clark is seen on the obverse along with the coins’ denomination of 200 DOLLARS or 25 DOLLARS (gold), or 1 DOLLAR (silver), which is included beneath the Queen’s likeness. 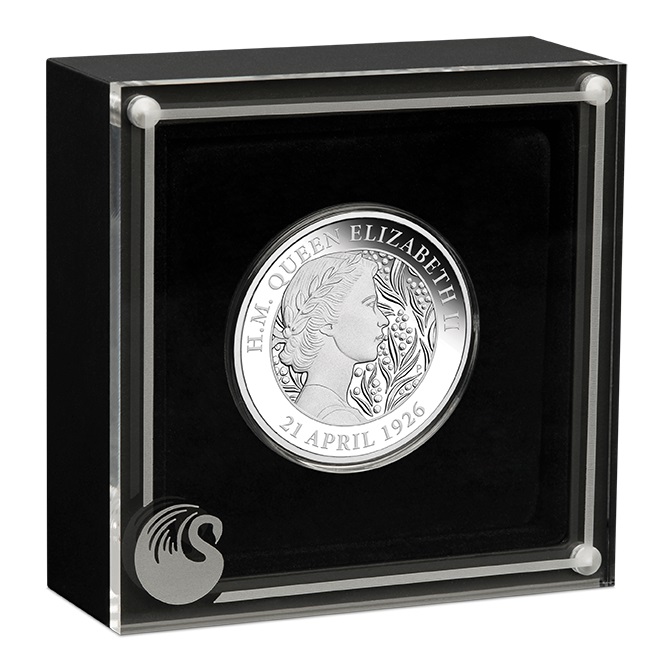 Available from the 10th August, each coin is enclosed in a specially designed perspex case enhancing its display and viewing of both the obverse and reverse and is accompanied by a numbered certificate of authenticity. For additional information about these coins and others available, please visit the Perth Mint’s website.