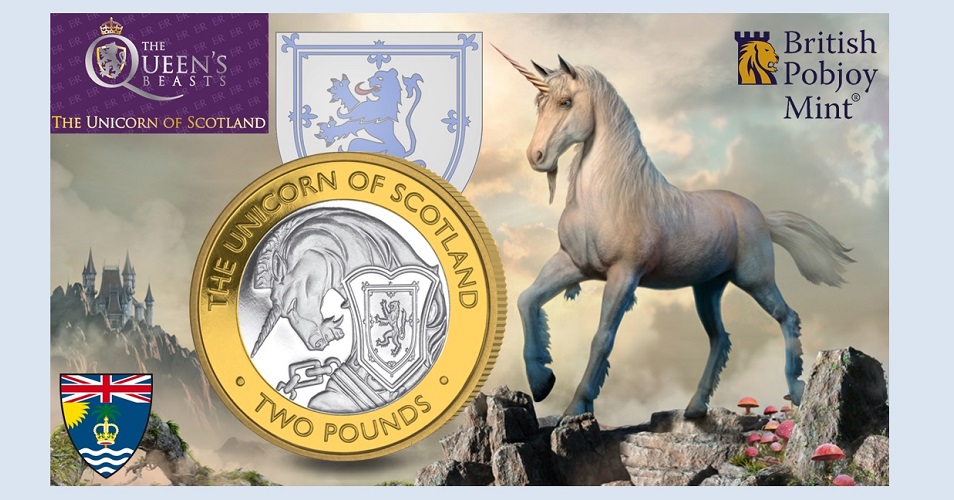 The government and treasury of the British Indian Ocean Territory have released their seventh coin in their popular series featuring the “Queen’s Beasts,” a £2 collector coin series. As Her Majesty Queen Elizabeth II celebrates her 95th birthday this year, a series of coins featuring the Queen’s Beasts is an appropriate tribute to celebrate this event, a milestone that no other English or British monarch has reached.

The Unicorn of Scotland’s relation to the Queen’s heritage originates from her lineage from King James VI of Scotland, who became the first Stuart king of England and ruled a unified England and Scotland in the 17th century. Upon the death in 1603 of Queen Elizabeth I who died without an heir of her own, the Crown of England passed to her kinsman King James VI of Scotland, son of Mary, Queen of Scots, who then became James I of England. When King James inherited the English throne, he took as supporters of his new royal arms or crest, a crowned Lion of England and one of his Scottish unicorns. As well as being one of the Queen’s Beasts, the unicorn is also the national animal and symbol of Scotland.

The bi-metallic coins are produced by the Pobjoy Mint at their facilities in Surrey, England, on behalf of the treasury of the British Indian Ocean Territory. The design on the reverse side of the coin includes the image of a unicorn with a gold collar and chain attached to its neck holding a shield showing the royal arms of Scotland and a lion rampant within a double tressure flory-counterflory. Above the primary design is the text THE UNICORN OF SCOTLAND and below is the denomination of TWO POUNDS.

The obverse side includes an effigy of HM Queen Elizabeth II as created by the Pobjoy Mint and is an exclusive design. The issuing authority BRITISH INDIAN OCEAN TERRITORY surrounds the Queen’s likeness and the year of issue 2021 is seen just below.

Each Brilliant Uncirculated coin is presented in a blister-type coin card format with informative text and images pertaining to the White Lion of Mortimer. The sterling silver Proof examples are encapsulated and presented in a custom case accompanied with a certificate of authenticity. For additional information on this and the other coins in the series, please visit the website of the Pobjoy Mint.