Home » Coin » Q&A: Did the postal situation of the 1850s affect the introduction of the three-cent denomination?
Coin

Q&A: Did the postal situation of the 1850s affect the introduction of the three-cent denomination? 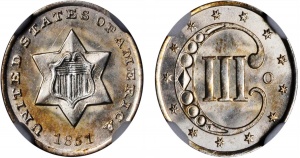 Q: People have told me that the three-cent denomination was introduced into our coinage system because of the postal situation at the time. Could you explain this for me?

A: There were two principal reasons for the introduction of the three-cent piece, or “trime” as it came to be referenced in Treasury documents. One of the reasons was the fact that the basic letter-rate postage fee was reduced from five cents to three cents in 1851. It was thought that purchases of three-cent stamps could be facilitated with the presence in circulation of a three-cent coin, as opposed to having to pay with three of the large copper cents of the day. The cent had a diameter of 27.5 millimeters and a weight of 10.89 grams, in contrast to trimes’ diameter of 14 millimeters and weight of just 0.8 grams.

Then there was the discovery of gold in California in 1849, which dramatically increased the supply of that precious metal, resulting in a drop in the price of gold in relation to that of silver. This development caused the intrinsic value of silver coins to rise above their face value; that is, they became worth more as bullion than as money. This caused all silver coins to be hoarded or exported, to the detriment of trade. The first three-cent pattern coins were produced in early 1849, with another added in 1850. None of these patterns resemble the coin ultimately issued in 1851, a year for which no additional three-cent patterns are recorded.

When the silver three-cent piece was introduced, it was produced to a lower silver fineness and fine silver weight standard, representing an intrinsic value of 86% of the nominal face value to discourage hoarding and to provide a coin for trade, with a convenient transaction value between the cent and half-dime. Initially, it was issued as a .750 fine silver coin with a net silver weight of about 0.6 grams, significantly below the proportional net silver weight of a half-dime, which was 0.7236 grams. Commencing in 1853, when the Act of February 21, 1853, mandated a standardization of silver coin fineness and weight standards, the .900 fine silver weight of the three-cent piece was adjusted to 0.675 grams.