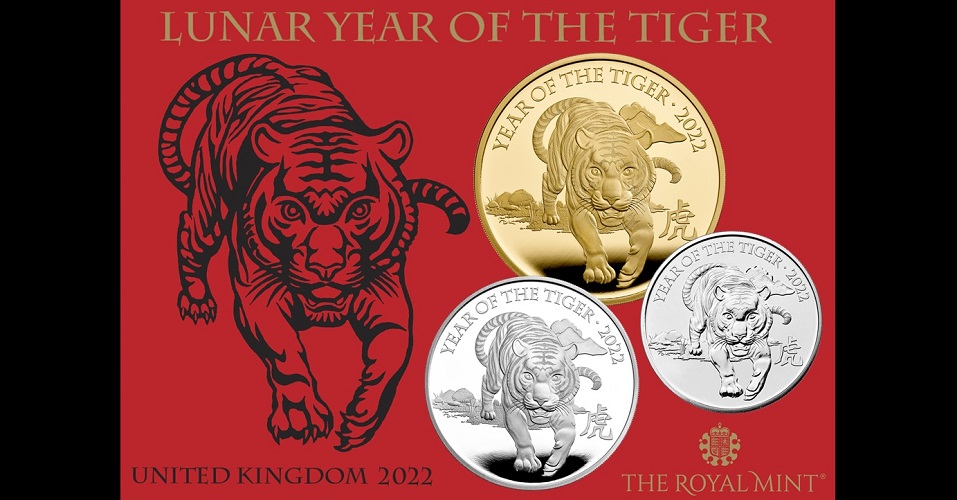 The Royal Mint has launched (6th September) their latest range of gold and silver Proof-quality collector coins entitled the “Shēngxiào Collection” and which is part of their continuing Lunar Year range. The programme will cover all 12 Lunar zodiac signs which change and revolve every 12 years. As with the Western Zodiac, those born during specific years are said to have attained very definite attributes associated with the real or mythical animal representing that year. Starting from the 1st February 2022 and ending on the 31st January 2023, the most recent years of the Tiger include 2022, 2010, 1998, 1986, 1974, 1962, 1950, and 1938. The Year of the Tiger is also associated with particular elements which change with each cycle and can range from fire, earth, wood, or even gold. This year, the Tiger is associated with water. Incidentally, it has been found that not only can tigers swim, but they seem to enjoy the experience.

Those born during the Year of the Tiger, their personality is said to be strong-willed. Once they make up their minds, they will not change it easily and will never regret what they have said in terms of speaking their minds. They are said to be born with stateliness and confidence, so they always impress people with an image of power and authority.

The reverse side of the coins is created by renowned artist David Lawrence who has exquisitely blended elements of traditional British design with ancient Far East Asian culture. The eye-catching motif is the tiger face on and moving towards the viewer. Upon closer inspection of the design, an additional symbol can be seen on the tiger’s forehead. The symbol represents a pictogram or symbol for “king” (王) and can be found within the markings on the tiger’s head. Above the primary design is the text YEAR OF THE TIGER 2022 along the upper edge.

The obverse side includes the fifth effigy of HM Queen Elizabeth II created by engraver Jody Clark and introduced on British coins since 2015. Included within the legend around the Queen’s likeness is the denomination of the coin from 2 POUNDS to 1000 POUNDS.

The 2022-dated Lunar Year range is available in a variety of versions, from base metal cupro-nickel struck to Brilliant Uncirculated quality to gold and silver ounce, five, 10, and one-kilo sized pieces. The gold varieties consist of quarter, one, and five-ounce pieces along with one-kilo coins struck to Proof quality. Each of the precious metal examples is specially encapsulated and presented in a custom case to accommodate its specific size and is accompanied by a numbered certificate of authenticity and booklet detailing the background information about the Year of the Tiger. For additional information about the entire range, please visit the Royal Mint’s website.

Can Corporate Treasurers Afford to Ignore Palantir’s Gambit on Gold?