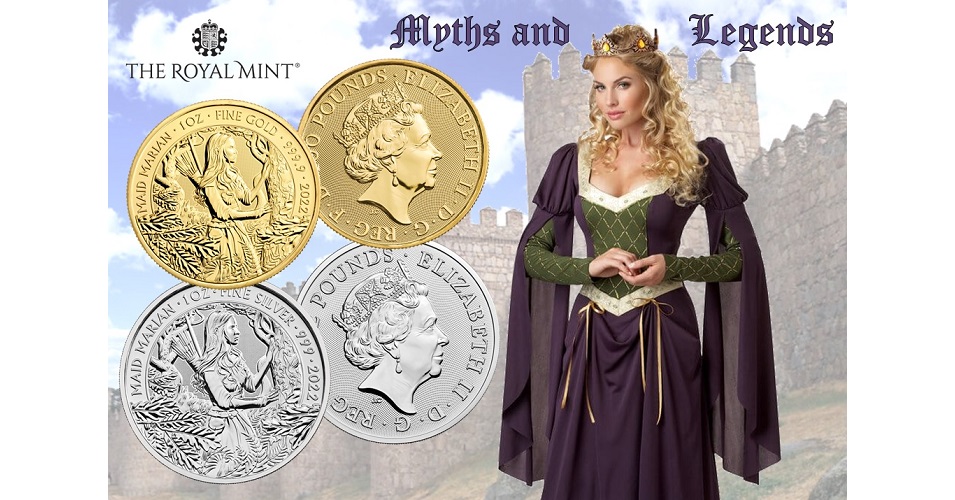 The Royal Mint has launched (16th August) their latest gold and silver bullion-quality coins that highlight English folklore and legends during the medieval age. One of the most popular and enduring stories is that of Robin of Loxley — otherwise known as Robin Hood. Following up from the first coin in the series, which featured the hero who robbed from the rich and gave to the poor, the second coin features the lovely Maid Marian, the heroine and love interest who commanded high respect in Robin’s circle for her courage and independence, as well as her beauty and loyalty.

There are several stories and interpretations of Maid Marian, she has been described a lady-in-waiting to Eleanor of Aquitaine during the Crusades, she has been noted as a shepherdess, or was perhaps the daughter of the former sheriff who was betrothed to Robin before his leaving for the Holy Land during the Crusades. It was during his absence that she may have embarked on her own crusade against poverty in aiding the poor in a fashion similar to what Robin later achieved.

Stories emerged from the 1800s which identified a Robert Hood, yeoman from Wakefield, Yorkshire, in the archives preserved in the Exchequer and whose personal story matched very closely the story of Robin written by Anthony Munday, an English playwright and miscellaneous writer. His Elizabethan version of the classic story makes reference to this Robert Hood who married a woman named Matilda, who changed her name to Marian when she joined him in exile in Barnsdale Forest, following the Battle of Boroughbridge in 1322. Munday identified Maid Marian with the historical Matilda, daughter of Robert Fitzwalter, leader of the baronial opposition against King John. Later more contemporary versions of the story of Robin Hood portray Marian as a high-born Norman girl escaping entrapment in an arranged marriage. With the aid of her attendants, she runs away to Sherwood Forest, where she becomes acquainted with Robin Hood and his men, ultimately marrying the man she loves — Robin of Loxley.

The 2022-dated coins are designed by engraver Jody Clark, which includes a less traditional depiction of Maid Marian, who is seen with a bow and a quiver of arrows on her back, against the backdrop of Sherwood Forest. The inscription around the primary design reads MAID MARIAN 1 oz FINE GOLD 999.9 2022 or SILVER 999 2022. In addition to the detailed design of Maid Marian, the coin features a secure, micro-dot background texture, which is an added security feature.

The obverse side includes the fifth effigy of HM Queen Elizabeth II created by engraver Jody Clark and introduced onto British coins in 2015. Included within the legend around the Queen’s likeness is the denomination of the coin, 100 POUNDS (one-ounce gold) or 2 POUNDS (one-ounce silver).

Each gold and silver coin is individually packaged in a single coin capsule. For additional information about these and other bullion-related products from the Royal Mint, please visit their website.

Inflation: Keynes, the gold watch and everything